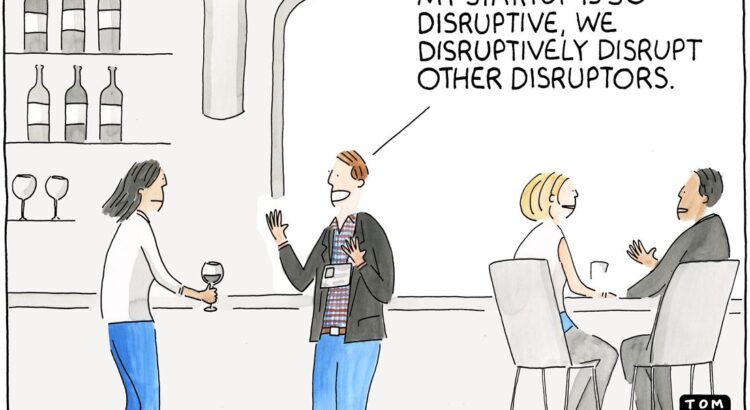 If you never heard about him, or you heard but you don’t know much, I recommend you to look for him and his articles on Harvard Business Review. Clayton Christensen is considered one of the most influential business thinkers, and earned several awards and recognitions.

“Disruptive innovation” is the concept linked to his career. He first published about it in the article Disruptive Technologies: Catching the Wave, which was the seed of his first and most awarded book The Innovator’s Dilemma: When New Technologies Cause Great Firms to Fail, book endorsed by people like Steve Jobs.

Why it is important to know about it?

There’s a lot of hype around the term “disruptive”, nowadays, an even more in the technological ecosystem, everything seems to be a disruption, but it is not. Sometimes disruption is misunderstood.

As I shared in the previous post, the term disruptive innovation has been growing in interest over time, according to Google Trends’ data.

We all hear a lot this concept, so I think it is enough reason to at least clarify the meaning and to double-check briefly what it is and what it is not.

What it means disruptive innovation?

The idea of “disruption” describes a process whereby a smaller company with fewer resources can successfully challenge established incumbent businesses.

Due to constant misinterpretation of what means to be a “disruptive innovation”, Christensen often wrote articles trying to explain the concept even further.

How to distinguish a disruptive innovation?

It is important to distinguish between what is disruptive innovation and what is sustained innovation. Recently, in 2015, Clayton published an article where he explains the difference.

Following the description of this text, disruptive innovations are “initially considered inferior by most of an incumbent’s customers. Typically, customers are not willing to switch to the new offering merely because it is less expensive. Instead, they wait until its quality rises enough to satisfy them. Once that’s happened, they adopt the new product and happily accept its lower price. (This is how disruption drives prices down in a market.)“.

In layman terms, a sustaining innovation is a new innovative product that appears and it is just better than its competitors in the market. As Clayton stated, “the latter make good products better in the eyes of an incumbent’s existing customers“. But the main difference is the disruption.

Points to identify a disruptive innovation

This would be a classic example. In telecommunications, the dominant companies were Lucent and Nortel. Cisco appeared from the bottom, offering a cheaper and initially not good enough router solution to compete with them in the voice area, using circuit switching.

While Cisco was developing and improving the router technology, it made no sense for Lucent or Nortel to pay attention to the disruptive technology. Nobody was interested, technology was good for data but not fast enough for voice.

But it turned out that one day, the router had improved and was fast enough to handle voice. And the router put circuit switching out of business.

As Clayton said, “I wonder who at Lucent decided that they should go out and get killed?“. The answer of course is that nobody at Lucent made this decision. But people at Cisco did things right.

Let’s clarify first that Apple iPhone product was a sustaining innovation in the smartphone market. Why? It targeted the same market customers and his initial success is explained but its product superiority.

But its growth is explained by disruption. Smartphones weren’t the primary access point to the internet. This was achieved not only through product improvements but also through a new business model.

By building a network connecting application developers with phone users, Apple changed the game. The iPhone created a new market for internet access and also was able to challenge laptops as mainstream users’ device of choice for going online.

Why I am sharing this case if Uber is not disruptive? Because TechCrunch published an article named Why Clayton Christensen Is Wrong About Uber And Disruptive Innovation, where they agreed with that Uber was a sustaining innovation, but defended that UberX was disruptive.

And the story doesn’t end here, lately I found this medium post Why everyone is wrong about Disruptive Innovation and what it actually means where you could find the arguments against TechCrunch article, defending that:

As you could see, it is very easy to lose focus on what is a disruptive innovation. As stated at the beginning of this post, not every innovative tech or startup is disruptive.

As I did on my previous post about Clayton Christensen, I didn’t want to finish without including a video, this time a much larger and interesting one from “Talks at Google”.

In this video, you will be able to dive deeper into Clayton’s theories. As he was visiting Google, he focused on three questions: Sustain success, growth, and theories about management.

And that’s all, I hope you liked it

When I began writing about Clayton Christensen some months ago, I never expected to have this draft waiting to be finished for that long period. I hope that it was worth waiting for.

These two posts were my humble tribute about professor Clayton Christensen. Sometimes when writing about some concepts, you can be boring or confusing. I hope that this was not the case.

I would love to know your thoughts and comments about it! Were you more interested in disruption, or maybe about measuring your life?

I hope you liked it. If so, please share it! And, if you want to stay up to date, don’t miss my free newsletter.